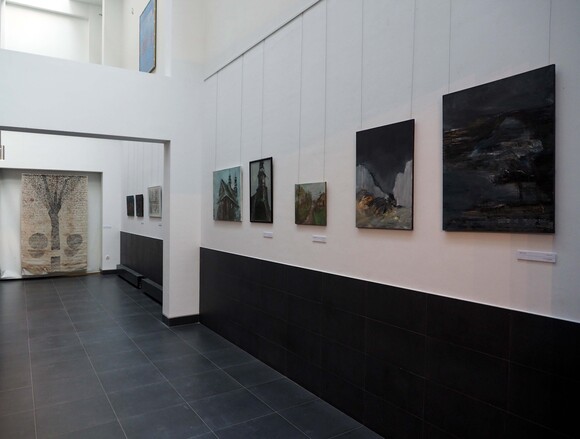 The activities of the Promotion Gallery are closely related to the ASP Gallery operating outside the University in 1991-2011. The history of the gallery "in exile" was associated with the complex housing problems of the Academy after 1991 and the need to leave the premises at ul. Bracka 4. Another nearly 20 years of exhibition activity of the University conducted in many places, including using the rooms of the City Center Culture Center at ul. Mikołajska 2 and the longest, until 2011, taking advantage of the hospitality of the State Theater School and foyer space at ul. Straszewskiego 21-22, creating a joint initiative Galeria ASP at PWST. The gallery's guardians at that time were the Vice-Rector for Student Affairs: prof. Zbigniew Łagocki, prof. Piotr Kunce, prof. Jacek Cupryś, prof. Józef Sękowski, prof. Jerzy Nowakowski and finally prof. ASP Łukasz Konieczko, who continued the gallery's activity under the banner of the Promotion Gallery of the Academy of Fine Arts from 2011 to the end of the term in 2012, in the main building of the Academy at pl. Matejki 13.
During this period, the ASP Gallery, with a changing location, kept its basic "mission", which was the presentation of outstanding University students, group exhibitions, post-open-air presentations as well as sporadic presentations of invited guests from outside the Krakow Academy, both domestic and foreign artists.

An important moment in the history of the Academy of Fine Arts was the expansion of the courtyard space located between the main building at pl. Matejki 13 and the wing at ul. Basztowa 16 and a new building at ul. Paderewski. Even before the investment was commissioned (which took place in 2013), in 2011 the headquarters of the university gallery was moved to the space of the future auditorium foyer, temporarily adapted for exhibition purposes, thus creating the foundations of the Promotion Gallery of the Academy of Fine Arts. Due to its location on the mezzanine, behind the historic plaster cast of the Medici Michelangelo sculpture there, the gallery was called Za Medyceusz (many people remembering that period still use this name), to which the logotype of the Promotional Gallery of the Academy of Fine Arts, initiated by the gallery's curator, refers to prof. Łukasz Konieczka and designed by prof. Zbigniew Bajk.

After completion of works related to the said extension, the Promotion Gallery expanded its space and finally located in the lobby connecting three buildings (the so-called Matejkowski at Matejki Square, at Basztowa Street and the new one from Paderewskiego Street) and in some of the recovered rooms of the historic cellars under the building at Basztowa 16. The current exhibition space, having a total of about 240 m2, located on three levels, thanks to its specificity combining the atmosphere of Krakow's cellars, multi-functional space and architectural combinations of "old" and "new", gives the chance to build an interesting exhibition program, often in parallel presenting various exhibitions and curatorial projects.

The exhibition schedule is completed well in advance, those willing to present their artistic achievements are not only students and doctoral students of the Krakow Academy of Fine Arts, in recent years many non-university initiatives, nationwide student projects, exhibitions that have been the result of international cooperation and the effects of cooperation with other institutions have been presented in the Promotion Gallery. culture, e.g. ZPAP or the GAP foundation, with which in the last four years GP Academy of Fine Arts organized (in cooperation with the Nowa Huta Culture Center) large exhibitions of outstanding educators associated with the Academy of Fine Arts in Krakow, i.e. Paulina Wojtyny, prof. Janina Kraupe, prof. Janusz Tarabuła, prof. Stefan Gierowski, prof. Leszek Misiak and his students, prof. Franciszek Bunsch and Prof. Ryszard Otreba.

The Promotional Gallery regularly presents, among others works submitted to the student cyclical "Competition for the Work", an initiative of the Doctoral Students' Union and the University Student Council, but also the yield of inter-university workshops, symposia or international and national competitions in many artistic disciplines. Constantly enriched gallery equipment also gives the opportunity to build more demanding exhibitions, especially in the light of the growing interest in multimedia solutions.

This email address is being protected from spambots. You need JavaScript enabled to view it.

Cookies are short reports that are sent and stored on the hard drive of the user's computer through your browser when it connects to a web. Cookies can be used to collect and store user data while connected to provide you the requested services and sometimes tend not to keep. Cookies can be themselves or others.

So when you access our website, in compliance with Article 22 of Law 34/2002 of the Information Society Services, in the analytical cookies treatment, we have requested your consent to their use. All of this is to improve our services. We use Google Analytics to collect anonymous statistical information such as the number of visitors to our site. Cookies added by Google Analytics are governed by the privacy policies of Google Analytics. If you want you can disable cookies from Google Analytics.

However, please note that you can enable or disable cookies by following the instructions of your browser.